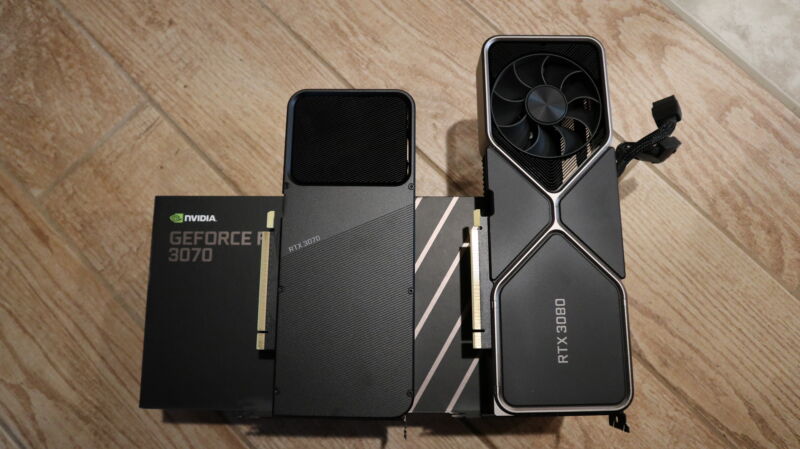 Nvidia’s GeForce RTX 3000-branded graphics cards are receiving an update off the factory lines starting this month: hardware-level flags meant to slow down the mining of the popular cryptocurrency Ethereum. Nvidia’s Tuesday announcement confirmed that most consumer-grade GPUs coming out of the company’s factories, ranging from the RTX 3060 Ti to the RTX 3080, will ship with a new sticker to indicate a “Lite Hash Rate,” or “LHR,” on the hardware, driver, and BIOS level.

If this move sounds familiar, that’s because Nvidia already took a massive swing at the cryptomining problem, only to whiff, with February’s RTX 3060. That GPU’s launch came with promises that its Ethereum mining rates had been cut in half from their full potential rate—a move meant to disincentivize miners from buying up limited stock. And in the GPU’s pre-release period, Nvidia PR Director Bryan Del Rizzo claimed on Twitter that “it’s not just a driver thing. There is a secure handshake between the driver, the RTX 3060 silicon, and the BIOS (firmware) that prevents removal of the hash rate limiter.”

Yet shortly after that card’s commercial launch, Nvidia released a developer-specific beta firmware driver that unlocked the GPU’s full mining potential. Remember: that’s firmware, not a BIOS rewrite or anything particularly invasive. With that cat out of the bag, the RTX 3060 forever became an Ethereum mining option.

Source: Nvidia will add anti-mining flags to the rest of its RTX 3000 GPU series