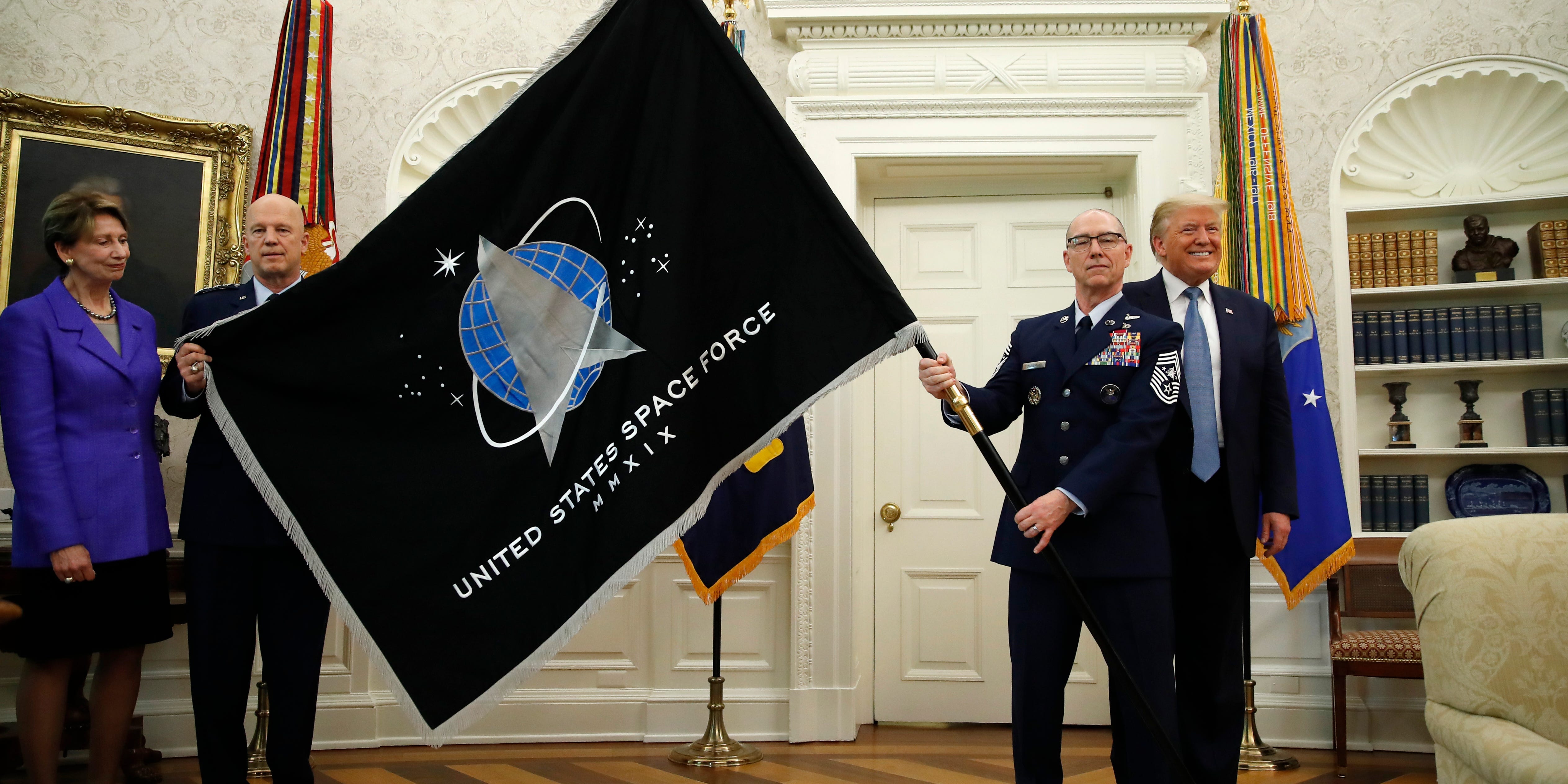 President Donald Trump stands as Chief of Space Operations at US Space Force Gen. John Raymond, second from left, and Chief Master Sgt. Roger Towberman, second from right, hold the United States Space Force flagÂ as it is presented in the Oval Office of the White House, Friday, May 15, 2020, in Washington. Secretary of the Air Force Barbara Barrett stands far left.

A commander in the US Space Force was fired for comments made during podcast appearances.
Lt. Col. Matthew Lohmeier was promoting his self-published book that claims Marxist ideologies are spreading in the US military.
A DOD spokesperson told CNN he was fired “due to loss of trust and confidence in his ability to lead.”
See more stories on Insider's business page.

A commander in the US Space Force was removed from his position following comments he made on podcasts promoting his new book that claims that Marxist ideologies are spreading in the US military.

Lt Col. Matthew Lohmeier was a commander of a unit responsible for detecting ballistic missile launches, according to a report from Military.com.

During a May appearance on the “Information Operation” podcast, Lohmeier claimed leftist ideologies were spreading throughout US society, including in the media, in universities, in the federal government, and in the branches of the US military.

In an appearance on another podcast, the Steve Gruber show, Lohmeier said: “Since taking command as a commander about 10 months ago, I saw what I consider fundamentally incompatible and competing narratives of what America was, is and should be,” according to CNN.

“That wasn't just prolific in social media, or throughout the country during this past year, but it was spreading throughout the United States military,” he added. “And I had recognized those narratives as being Marxist in nature.”

According to CNN, when asked for an example, Lohmeier mentioned The New York Times' 1619 project, which critically examines the legacy of slavery in the US. The project has drawn anger from Republicans who have fought to ensure it isn't taught in schools.

He also said practices like mandatory diversity and inclusion training, which Republicans have also rejected, create divisiveness in the US, according to Military.com.

Lohmeier was promoting his self-published book “Irresistible Revolution: Marxism's Goal of Conquest & the Unmaking of the American Military.”

The Department of Defense did not immediately return Insider's request for comment, but an official confirmed to both CNN and Military.com that Lohmeier had been removed from his post.

“This decision was based on public comments made by Lt. Col. Lohmeier in a recent podcast. Lt. Gen. Whiting has initiated a Command Directed Investigation (CDI) on whether these comments constituted prohibited partisan political activity,” the spokesperson told the outlet.

As Military.com reported, the nature of Lohmeier's new temporary assignment is not clear.

“I was apprised of the option to have my book reviewed at the Pentagon's prepublication and security review prior to release, but was also informed that it was not required,” Lohmeier told Military.com.

He said he never intended to “engage in partisan politics”

“I have written a book about a particular political ideology (Marxism) in the hope that our Defense Department might return to being politically non-partisan in the future as it has honorably done throughout history,” he told he outlet.

Source: A Space Force Commander was fired after comments made on conservative podcasts about diversity and Marxism

Maryland Gov. Larry Hogan says it was a ’mistake’ to oust Liz Cheney and calls Trump ’toxic for the Republican Party and for the country’